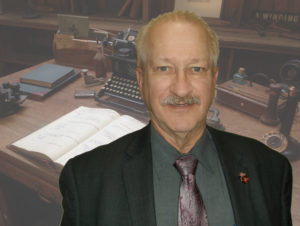 Rick Page, the author of FATE’S First Turn, has watched the world of terrorism escalate almost first hand. This book is about its further escalation. Rick has seen the reaction of this escalation from the military, civilian and government population. He was in the Marine Corps when Iran took the hostages in 1979 and he was less than 10 miles from the Pentagon on 9/11 and watched the chaos that ensued in the DC area. He writes about those reactions

As a young man growing up Rick lived in Garden City, Michigan is where he gained his perspective on life. The third from the youngest of nine, he grew up reading books and writing poems and short stories. Reading was a major part of his childhood and young adult life. Books by Mark Twain, Edgar Allan Poe, Charles Dickens and many other writers filled his waking hours. Sports were also a major part of his childhood both playing and watching. His family and friends were always a guiding force for him. As an adult he likes to read all good fiction but his favorite genre is Adventure and novelist like Clive Cussler, WEB Griffin, Tom Clancy and James Patterson to name a few. He is also a Sci-Fi reader, Terry Goodkind, Christopher Paolini and Jack L Chalker are some of his favorites there.

As a young adult he heard his country calling and joined the United States Marine Corps. During his tour he and his wife were stationed at NAS Whidbey Island, WA in the Puget Sound. He worked security there and that is where his foundation for his first book started. Rick Page was Honorably Discharged From the USMC.

He and his former wife raised their children in and around the Dannebrog, Nebraska where he played fast pitch softball and coached and umpired his and other boys. Rick worked and traveled throughout the state. The four main characters in FATE’S First Turn are named after his four sons, Richard, Aaron, Raymond, and John Wayne.

Later he worked throughout the upper Midwest and in the DC metro area, and is currently living in Lincoln, Nebraska. From one coast to the other Rick has seen and been influenced by the American people and the American way of life.

Rick Page is presently is writing the sequel to FATE’s First Turn.